Blue with yellow shaped heart in the center

Adorabat is the secondary protagonist of Mao Mao: Heroes of Pure Heart.

She is a bat inhabitant of Pure Heart Valley who wishes for adventure in the place of safety. She quickly becomes impressed with the skills of Mao Mao and Badgerclops, and aids them with the defeat of Orangusnake. Mao Mao recruits her into the team of heroes.

Adorabat is a blue, small bat with big yellow eyes. Her body resembles a stuffed animal, and has a yellow heart on her belly. Her right leg is missing, and has been replaced with a yellow peg leg; it is currently unknown how, or if, she lost her original leg.

Like the other inhabitants of Pure Heart Valley, Adorabat has a sweet, childish nature. Yet, unlike the other villagers, she has a desire for adventure and shows no sign of cowardice. She tends to be over-excited and acts carelessly. In "Outfoxed", however, she is shown to be too innocent, naive, and gullible because of a nice act, though she still retains her optimism even after originally saddened by how she was being cheated.

She has been shown to be a little mischievous and manipulative, generally with good intentions which can easily fool an enemy or friend. This trait later helps them in some way, but this doesn't end well most of the time.

In spite of her usual niceness, Adorabat can turn violent when enraged, shown in "Outfoxed" where she incessantly attacks Rufus and Reggie with a chair after realizing the latter two have cheated  her, and in "Bobo Chan" when she has a vendetta against the titular baby monster and trying to slay Bobo Chan, as well as in "Not Impressed" when she almost tried to attack Ol' Blue who was not impressed by Mao Mao's skills. In fact, she actually has a somewhat malicious nature, often taking great joy in causing pain or violence to her victims. Such acts include bullying the other students at her elementary school, collecting a huge amount of bones and popping balloons with sharp sticks.

Adorabat admires Mao Mao's skills and idolizes him, seeing him as a role model. The pair share a mentor/protege relationship, with Mao Mao playing the role of her mentor and father figure to a certain extent.

Adorabat became quick friends with Badgerclops after he and Mao Mao crash landed. She usually gets encouragement from Badgerclops, who generally permits her to have wild fun, much to Mao Mao's chagrin.

Adorabat considered Rufus a "friend" and always gave him the benefit of the doubt. However, he was simply using her to avoid being arrested by Mao Mao. After his true intentions are revealed, Adorabat becomes heartbroken, and then enraged at Rufus and Reggie, and, despite her normally non-threatening nature, proceeds to give them a brutal beating.

Adorabat's parents are never seen and were only mentioned in "Head Chef" where she briefly mentions her father who told her that she had a rich inner life. She does not live with her parents nor seems to spend any time with them, preferring to be with Mao Mao and Badgerclops, which may indicate that she might not have a good relationship with them.

At the start of the series, Adorabat is shown to be something of a maverick, not really fitting in with the other Sweetypies due to her desire for violence. After she becomes Mao Mao's side-kick, she becomes very popular with the Sweetypies; even enjoying celebrity status at some times. In fact in the episode "Popularity Conquest" it is revealed that she is, in fact, more popular than Mao Mao because of how adorable she is. In the episode "Trading Day" it is revealed that she lords over the other students at school like a dictator.

Speed: Like all other inhabitants of the Valley, she can move really fast without making a sound.

Flight: As a bat, she can fly without assistance. She is able to reach heights and speeds comparable to that of the aero-cycle.

Strength: Despite her small stature she is shown to be very physically powerful able to take on enemies many times her own size, proven by the fact that she constantly defeats the sky pirates.  In "Baost in Show" she was able to knock out two fully grown guards with her wings, likely a result of Mao Mao's training.

Molting: Adorabat can molt her skin. This was seen in "Ultraclops", when she avoided a conversation with Badgerclops.

Prestidigitation: Adorabat is very skilled in doing magic tricks. This ability was showcased in "Enemy Mime", wherein she used magic tricks to defeat the blob that consumed the entire kingdom.

Basic Spear Proficiency: She received some training in the use of spears from Mao Mao in "Bao Bao's Revenge", though it is unknown if she developed this skill further.

Reading and Writing: It is unknown how well Adorabat can read, however, it is known that her writing is abysmal, as seen in "Popularity Conquest". 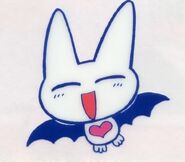 Add a photo to this gallery

Retrieved from "https://maomao.fandom.com/wiki/Adorabat/Bio?oldid=12135"
Community content is available under CC-BY-SA unless otherwise noted.