Mao Mao: Heroes of Pure Heart Wiki
Register
Don't have an account?
Sign In
Advertisement
in: Characters, A to Z, Recurring characters,
and 5 more
English

Chubbum is a frog inhabitant of Pure Heart Valley.

Chubbum is a frog Sweetypie with a heart on each cheek who wears two red boots. He is unable to clap his hands due to his short arms, but this doesn’t stop him from trying to do so.

Like the majority of Sweetypies, Chubbum is polite and kind, but also timid. For example, in "Not Impressed", he is shown to be traumatized after Mao Mao throws away a suit that resembles an empty Chubbum. 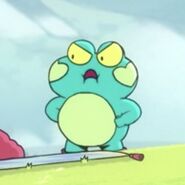 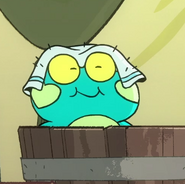