Kevin is a porcupine inhabitant of Pure Heart Valley.

Kevin is a young porcupine with a stubby body and short arms and legs. He has black round eyes and is buck toothed. He wears a blue pullover pants with light orange buttons and a pocket. He also has no fingers.

Kevin is a shy little boy who appears to be very sensitive, as he is often seen crying. He is usually portrayed as being a victim of circumstance, like when he got arrested in "The Truth Stinks" because he did not know that picking flowers from the park was illegal, or when Badgerclops insulted his mother in "Trading Day". 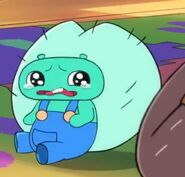