Lucky is an inhabitant of Pure Heart Valley.

Lucky is a lime green hamster who wears black framed glasses. His belly has a three-leafed clover pattern.

Lucky is a very carefree and trusting individual, as shown when he approached Mao Mao without hesitation in "I Love You Mao Mao". He is also easily disturbed, fainting when Mao Mao defeats the Impressasaur in "Not Impressed". 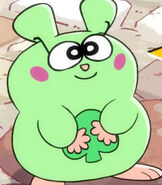