Mao Mao: Heroes of Pure Heart Wiki
Register
Don't have an account?
Sign In
Advertisement
in: Characters, A to Z, Female Characters,
and 4 more
English

Marion is an athletic yellow horse inhabitant of the Valley.

She has yellow fur, although her mane and tail are slightly more pale. She has an athletic physique with prominent abdominals, and she usually wears a blue top and pants. She is all muscular all over her body.

In comparison to the majority of Sweetypies, Marion is more headstrong and bold. She enjoys smoothies and flexing her muscles.

Although mostly strong, Marion can still be cowardly when dangers arise, such as when the valley is being invaded by monsters or worse, the Sky Pirates. She is also gullible, easily falling for Rufus and Reggie's scam in Outfoxed.

Hammering: She has a wooden hammer and practices with it at night. 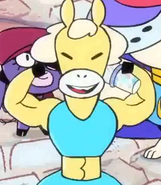