I Love You Mao Mao

Tommy Blacha
Ol' Blue is a blue dog inhabitant of Pure Heart Valley who works as a therapist.

He appears to be an anthropomorphic light blue dog. His ears droop below his eyes and he has a heart-shaped, dark turquoise nose. His eyes resemble squashed ovals. He has a big patch of dark blue appearing on his: left eye and ear, his back, and his tail. At most times, he has a rather serious, glum expression.

Like most inhabitants of Pure Heart Valley, he keeps a polite nature, but contrary to them, he is calm and serious. However, he dreads stalkers and does get frightened by Mao Mao who follows him incessantly without giving him personal space.

As a therapist, he is patient to listen to his patients’ problems. In Not Impressed, he gave Mao a therapy session concerning Mao Mao's father issues.

He likes to read books, hinted by how he thought that Mao Mao (whom he mistook as Chubbum as Mao Mao wore a disguise that resembled the young frog) had a good taste on books after he received one from Mao Mao. 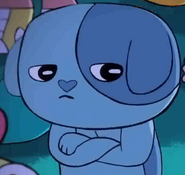 Blue is not impressed after the heroes defeat a monster.

Blue giving Adorabat a coin after she performed stylish dance.

Mao Mao scares Blue while trying to impress him.

Blue is horrified by Mao Mao