Mao Mao: Heroes of Pure Heart Wiki
Register
Don't have an account?
Sign In
Advertisement
in: Characters, A to Z, Male Characters,
and 7 more
English

Pinky is a pink male Rhinoceros sweetypie that lives in Pure Heart Valley.

Pinky is rather small, with a large horn protruding from his forehead, with a smaller one taking shape on the back of his head. He has pink hooves and eyes, with a heart on his chest being the same color.

Unlike most of the typical adorable inhabitants of the valley, Pinky has a sour, willful, and feisty personality. Self-described as disgusting and regarded as nasty by Mao Mao, Pinky often takes things he wants from others without asking their permission. For instance, Pinky refuses a beige pike Badgerclops gave him in "Bao Bao's Revenge" and demands a pink one. When Badgerclops refuses, Pinky knocks the pikes out of his hands, taking the pink pike and running away. He also steals old bagels from the dumpster on Wednesdays and has frequent run-ins with Mao Mao, Badgerclops and Adorabat.

In addition, Pinky often annoys Mao Mao and his deputies and is not always appreciative of their help. For example, Pinky gets stuck in a wooden fence on an almost daily basis, requiring Mao Mao and/or his deputies to rub greasy butter over his body before pushing him out. Unfortunately for Mao Mao and his friends, Pinky is implied to have passed gas in their presence whenever they initiate these operations, once proudly and shamelessly claiming that he farts whenever he feels nervous.

Mao Mao, Badgerclops and Adorabat find him annoying at best, mainly because he's constantly making their work hard with his silly stuff and stealing dumb things.

Pinky normally shows no respect for the king's authority and constantly pesters him. 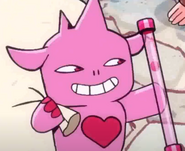 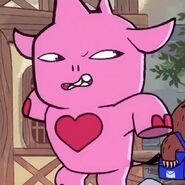 Stuck between fences with margarine/butter

Screaming after being sprayed 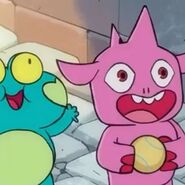