Slim Pigguns is a pig inhabitant of Pure Heart Valley.

Slim is a floppy-eared yellow pig with pink hooves and a curly tail. He has a pink heart on his tummy.

Although he is nice and playful, Slim can be dangerously careless, as he repeatedly backed over Mao Mao, Adorabat, Badgerclops, Penny, and Benny with his monster truck in "He's the Sheriff". He’s even a danger to himself, setting his house on fire by burning a bowl of cereal in the oven. 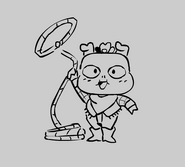